I have been …Weaponized 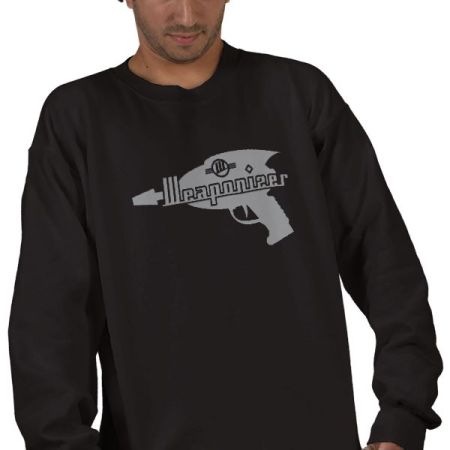 One of the many creative offshoots of the Warren Ellis battery farm for genial artists, writers and other wonderful passionate madfolk that mortals call Whitechapel is the group writing blog Weaponizer. Under the kindly eye of Bram E. Geiben aka Texture, it’s set a very high standard of work in a short time.

So last weekend I thought I’d try submitting a piece for them, see if I was ready to play with the big boys and girls.

Seems the piece – Tribe of the Strange: Origin Myth – went down OK. Enough for Bram to invite me onto the team as a staff writer, working the Fortean and occult beat.

I am beyond chuffed to be doing this. I have huge respect for all there and hope my mad point of view finds a home among them.

(To come at WPNZR – more rumbling on about oddness and hopefully the birth of the Mason Lang Film Club!)

And here, the next Guttershaman – “…of Jedi and Jail” – coming soon.

“Where there is money, you have cheats. The two go together.” Eric Cantona

“Send lawyers, guns and money – the shit has hit the fan.” Warren Zevon

I was looking at how modern Western ‘Shamanism’ is a mix of ideas borrowed from various native traditions (often without either respect or understanding). I also noted that sometimes the matter of ‘authenticity’ to an existing tradition was not the most significant point – that there are people who seem to have a genuine call to serve their tribe/culture/whatever and attempt to honour this vocation as best they can with the tools and ideas they have at hand. Authenticity to this impulse, if done sincerely and thoughtfully, can matter more than devotion to tradition. The question of how all this becomes even more complex when adding commerce to the mix, I left to examine at a later date.

In between then and now we have had a tragic example of how badly that mix can go wrong.

The story of how three people died and dozens were hospitalised as a result of taking part in a ‘spiritual warrior’ sweat lodge held by James Arthur Ray has been heavily discussed, both within the occult community and outside. (A good primer on this can be found at the Wild Hunt blog and the Wikipedia biography of Ray is also of use.) There’s been an awful lot said about Ray’s particular variation on the New Age Guru – much of it perhaps better left for the legal apparatus.

What is extremely clear, both from reports of those who were involved in the fateful sweat lodge itself and Ray’s own words (on his website – to which I will not directly link – and in his many media appearances) is that his primary focus is money. What’s also clear to me is that his ‘theology’ emphasises something I consider to be one of the nastier habits of many mystical systems – that the soul is far more important than the body.

I think those two points are deeply related.

The idea that spiritual purity and earthly success reflect each other – whether one calls it the Law of Attraction, Prosperity Theology or what have you – may seem to contradict the idea that the soul is more important than the material world. I think that it’s an inevitable result of how soul/body dualism is usually expressed in the West.

“Money is power. If I have money, I am powerful. If there is a God or spiritual force, then surely my power and position show that God favours my endeavours? If not, surely I would be poor and powerless?”

Add to this the concept that the soul is immortal and thus above/better than the body… and you get the justification for an awful lot of cruelty and privileged behaviour.

“You’re poor? That means your soul is weak, that God does not love you.”

Then, up steps the Guru.

“I can make your soul better. I can bring you wealth in this world and the next. But in order to show you are ready, that your are committed enough to begin this process, you have to make an offering. A sacrifice to the coming purity of your soul and the inevitable favour of God.”

If you’re the Guru and your prime interest is making money, it’s quite an effective sales technique – and provides a lovely example of just how powerful the Guru’s mojo is. After all, look how much money he has! He must be good at this!

…if you die while under the Guru’s tender care…

..well, that’s a shame. At least your soul learned something. Better luck next incarnation.

This is not to say that it isn’t possible for mystical pursuits to have an effect on the material world – I wouldn’t be much of a magician if I believed that. I also know that spiritual development can demand a heavy toll on the body of the practitioner, that the shamanic path often relies on stress, shock and fear as methods of altering consciousness. But it infuriates me when Gurus and teachers blithely assume that a purified soul is worth any cost to the body.

(It’s exactly the same attitude which leads to exorcisms resulting in the injuring or death of the subject – as long as the ‘demon’ is driven out and the immortal soul saved, it’s considered a price worth paying. As someone who strove to protect in every way those under his care as a professional exorcist and curse-breaker, it disgusts me when the supposed pursuit of spiritual purity is used as an excuse to torture, maim and kill.)

Ray is an especially clear example of how modern conceptions of the shaman are far too often expressed. His publicity makes a great deal about his experiences with several ‘authentic’ native traditions, but also borrows heavily from the layman’s version of quantum theory… while showing a painfully superficial understanding of both. There’s a lot of lip service to concepts such as (one of my all-time favourites) becoming a ‘spiritual warrior’ without actually having any martial training or combat experience whatsoever. There’s also the classic come-along of his Deep Inner Knowledge of Mighty Secrets of Power which he will share with you… for a hefty fee.

And what he’s selling is such a superficial version of wisdom, a weak dilution of knowledge. Shamanism For Dummies.

He, like so many New Age gurus, sells the illusion that someone can become a powerful magician/shaman without actually putting in the work – the months and years of practice, study and trial it takes to develop yourself. This isn’t just cheating his clients, it’s insulting to those who actually have done the work. It also gives a dangerous impression that Ray and his ilk are far more competent in these matters than they actually are. Ray claimed he was an expert, an authority in this field and as a result people trusted him with their lives and souls – and he wasn’t even able to work out that people in hot rooms need to breathe.

I think the thing about Ray that stood out for me most is how utterly plastic and shallow, how inauthentic in every sense, he seems. He comes across as nothing so much as Tom Cruise in Magnolia… I can picture Ray running around a stage, his little wire microphone stuck to his head, declaiming “Respect the cock! And tame the cunt!”. No master of the occult arts – just a salesman.

(An effective salesman, though. Bear in mind he’s still open for business and people are still going on his retreats.)

It’s not that I don’t think there’s a place for teachers of mystical knowledge – or that they shouldn’t be compensated for their time and services. As I said about the appropriation of native techniques, it’s about not taking the piss – not getting greedy, not assuming that everyone has the same strengths and abilities, not caring how hard you push the bodies of those under your tutelage as long as your idea of the soul is satisfied. When you think like that, it’s easy to forget that a person is mind and body and soul together – and that their existence does not come with a price tag.

Although their focus is mostly on the mysticism of the Indian subcontinent, the Guruphiliac blog has an excellent perspective on the money-grabbing (and ass-grabbing) side of so many alleged spiritual masters.

I also strongly recommend the two-part post at “Thoughts from a Threshold” which gives excellent advice on safety in ritual spaces, which is one of the few positive benefits to come out of the Ray affair.

Next time on Guttershaman – more on money and Newage, tricksters and con-men. Possibly even Rainbow Unicorns.